Series racing in Minnesota kicked off this past weekend and the team was out in full force. Sam Oftedahl and Eric Thompson recorded podium finishes in the Elite race with Sam recording 4th and Eric 5th. It was Eric's first mountain bike race since competing collegiality on the road. Also in Elite, Jake Richards recorded a 24th place overall and 2nd in age group and Eric Oftedahl recorded a 48th place after falling victim to a flat and having to run back to the car to get parts to repair and get moving again. Trent Warner racing in his first Elite race was 61st overall. Maplelag sponsored athlete Kyia Anderson was third overall in female Elite.

In the Comp class, Matt Horner led the team with a 13th place overall finish. He was followed by Jeremy Dirk in 60th overall.

In Citizen Taylor Horner was 128th overall and her brothers Devon and Wyatt finished 8th and 21st respectively overall in Kids Comp. Great job to all riders!! if I missed anyone, please let me know. Keep em' moving!
Posted by Jay Richards at 9:14 AM No comments:


The mountain bike season is starting to heat up with two races this past weekend, the Cable Area Off Road Classic and the Spring Fling at Hillside Park in Elk River MN. Lars Ellefson raced the Mountain States cup#2 taking the win in Cat1 19-29 stxc and 4th place in the XC. Nice job! 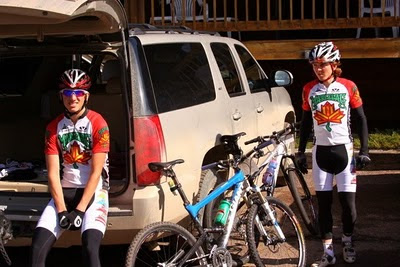 Jake and Sam getting ready before the start at Cable. 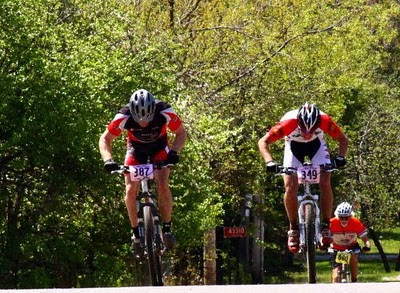 Jake sprinting for 25th at Cable. 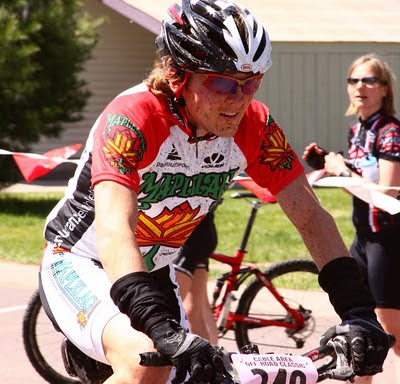 Sam after the finish, posting a solid 2nd place finish overall. On Sunday Sam hooked up with brother Eric to race at Hillside in Elk River. Erik took the win followed by Sam and Jack Hinkens. Trent Warner and Paul Cullen racing as well with Trent finishing 36th and Paul 28th. 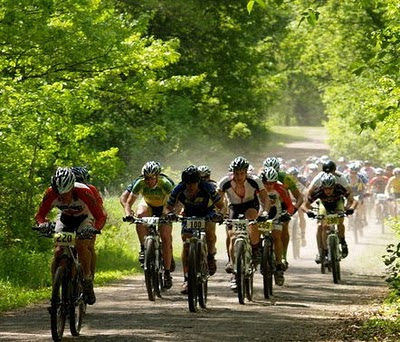 Eric out in front early at Spring Fling and staying there. Next up is the first Minnesota series race. Keep the wheels moving!
Posted by Jay Richards at 8:47 PM No comments:

Team member Eric Thompson was racing this past weekend at Collegiate Nationals in Madison, WI. Eric's dad John provides a recap of the crit:
Eric had arguably the best race of his life on Sat. night at the D1 crit. It was so exciting, I'll never forget it for as long as I live! With nine laps to go he bridged solo up to a two man break that had been off for two or three laps. He worked together with them to stay 10 to 15 seconds ahead of the field until three laps to go when they got caught. Eric attacked the field AGAIN at this moment and went clear stirring the spectators into a roar each lap he came through the start finish chicane ahead of the field. With one lap to go he still had five seconds on the field but they were well organized and closed him down just 300m from the line. Sooooooo close! Eric still hung on for 27th out of a field over 100, an impressive finish when he had absolutely nothing left in the tank. It's a bummer that his teammates couldn't help him disrupt the chase, but with an average speed of 28mph for the hour and hard racing the day before it was all they could do to sit in the pack. Eric's team took second in the overall omnium in a close battle. Collegiate racing is a lot of fun, next stop Truckee, CA, but before that the MNSCS and WORS races. Eric's revved to be coming home next week and will make it in time for the Inver Grove Heights race. 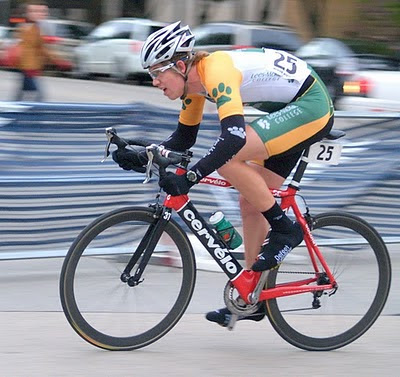 Eric diggin' and drillin' !!
Posted by Jay Richards at 6:53 PM No comments: