CX Nationals/Riders Waving the Flag Across the Board

Even though the mountain bike season is distant memory with the trails being buried in beautiful snow, team members are waving the flag nicely across the country. The big news last weekend was the podium finishes by Eric Thompson at Cyclocross Nationals in Oregon. Eric's dad John recaps and also links to the press below. 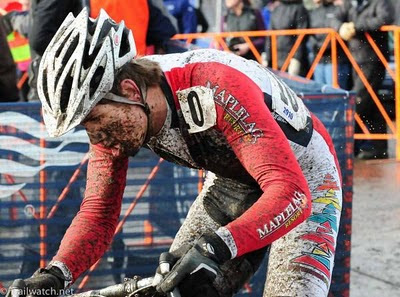 Eric digging hard in the U23 race. (Trailwatch.net photo)
In the U23 race he placed 4th and this was after he crashed on the last half lap of the race. It was unbelievable seeing him up there with the top U23 riders in the country, and he looked very comfortable doing it. At one point about three quarters of the way through the race he attacked Jerome Townsend and opened up nearly a 10 second gap! I thought he had 3rd place in the bag, but Jerome clawed his way back and the two of them rode together for the rest of the race until Eric's crash with a half lap to go. This was without a doubt a breakthrough race for Eric.
The collegiate race was even more exciting. Zach McDonald and Eric quickly separated themselves from the field and by the midway point probably had 30 to 40 seconds on everyone else. Again Eric looked very comfortable at the frenetic pace, but unfortunately at two laps to go, Eric snapped his derailleur off in a deep mud puddle and had to run a third of a lap to the pit where I had his second bike waiting. He chased hard to the roar of the crowd and finished in 5th place, the last podium spot. As a bonus he had a lengthy interview in front of the large crowd and helped his college team (Lees McRae College) win the overall national title. This was a weekend to remember! 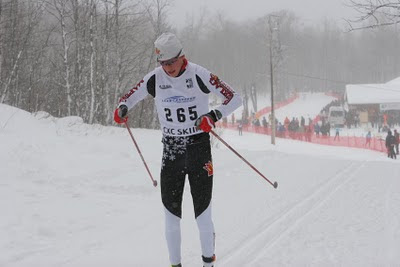 The ski season kicked off in the Midwest with the Wolverine Challenge in Ironwood, MI. The races are part of the qualifiers for Junior Olympic Nationals which will be held in Minneapolis in March of 2010. Jake Richards competed in the J1 division, finishing 9th in the skate race and 17th in the classic race among the top j1 skiers in the Midwest. Coverage on skinnyski.com (Scroll down to Wolverine-JOQ) 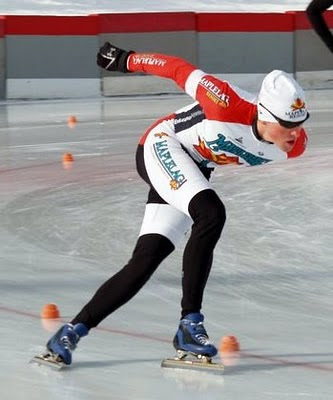 Speed-skating isn't a sport that gets a lot of coverage in the Midwest which is interesting when you consider there are over 10,000 lakes in Minnesota. Obviously a lot of kids who skate, play hockey. Eric Oftedahl is part of a close knit group of speedskaters out of the Twin Cities who trains and races on the ovals in the metro and other cities in the Midwest. Eric is above showing great form and waving the flag about as good as you can get. 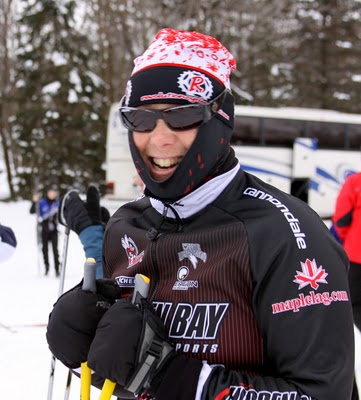 This past weekend at Maplelag we had a high school ski camp and Maplelag teamer Kyia Anderson and her husband Kris, helped out with ski clinics working with the Bloomington Jefferson team. Thanks guys!

Thanks to all team members for representing team Maplelag in various activities. Keep the wheels moving!!
Posted by Jay Richards at 11:34 AM No comments: