The summer is starting to wind down but we are entering one of the best times of year for riding and racing! The team is keeping the wheels moving and waving the flag nicely! Steve Wenzel and Brandon Charboneau filed recaps from the Gear Grinder and Salsa 2-4 which are posted in the skinnyski.com Midwest mtb report. 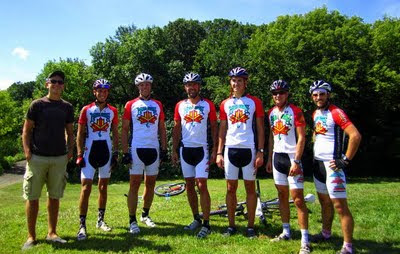 Last weekend the team made a strong showing at the inaugural Flugly race at Johnson Park in Moorhead. Ben, Matt and Steve Wenzel along with Matt Engen, Jeff Beck and Jay and Jake Richards took on the challeging 3 mile course that was fast and tricky with quick turns and obstacles that kept riders on their toes. Props out to Jeff who did a lot of trail work getting the course dialed in for race day.

Sunday was the Border Battle which saw Minnesota and Wisconsin riders dice it up at the White Tail Ridge trail system for fast and power type racing. 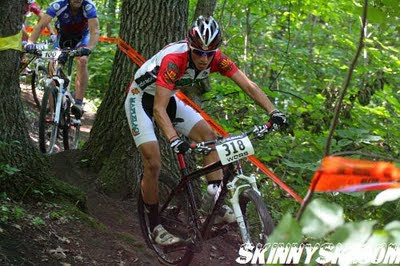 After racing the day before in Moorhead, Jake traveled across the entire state and raced up to the 19-24 class so he could earn points for the overall in Minnesota and posted a 26th place finish among a huge field of 70 Elites.
. 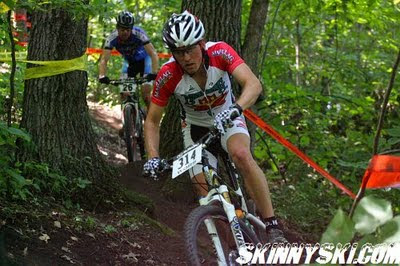 Eric Oftedahl slicing through the trees en route to a 17th place finish in Elite. 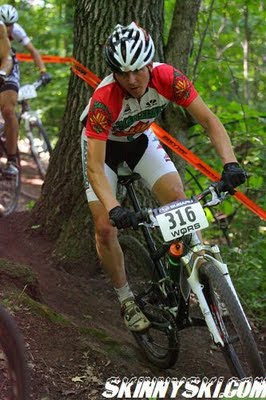 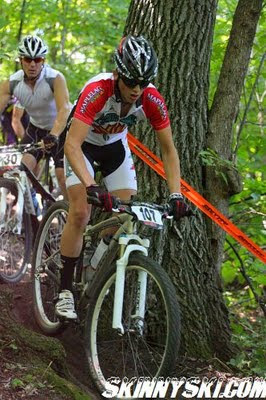 Casey Hildenbrandt posted his best finish of the WORS season, taking the win in Elite Jr. and wining by over 12 minutes! Nice job Casey! 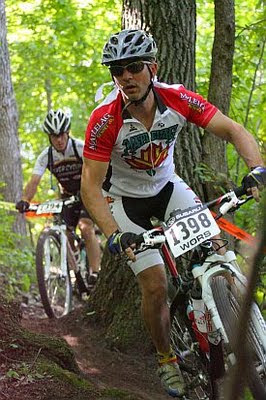 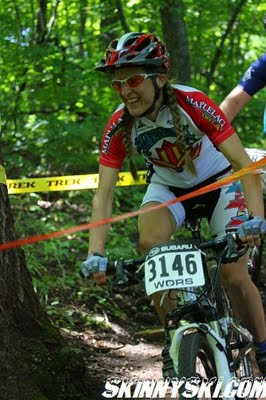 Andrea Horner posting one of her best finishes of the year taking second place overall among the Sport women that had a solid field of 36 riders.

We have been working hard on the Laddies Loppet course and the track is taking great shape. The new Twin lakes singletrack will be part of the course this year and should be a blast. Jens checking out the Loppet course this week after helping with pulaski work on a corner.


Posted by Jay Richards at 7:26 PM No comments:

Team riders hit up the series in both Minnesota and Wisconsin this past weekend. 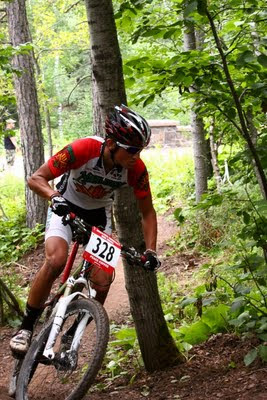 Jake Richards riding the last section of singletrack, battling with a group of riders to post a 6th overall place finish in the Elite class. Eric Lebow waving the flag at Great Hawk Chase. Riding this year for Peace Coffee. Once a team member, always a team member. 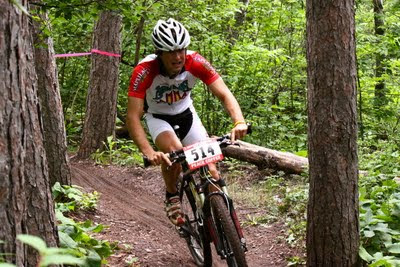 Mason Bacso having a great race in the Elite class in his first year of racing. 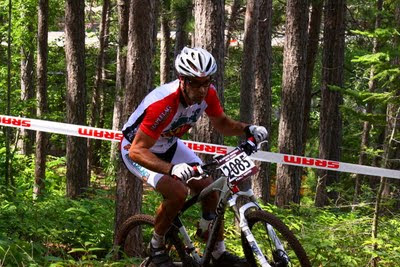 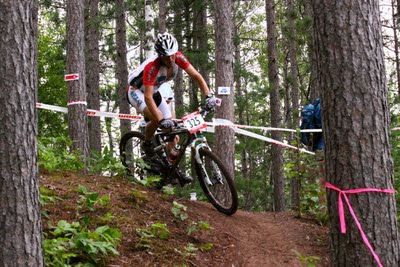 Eric Oftedahl coming around the corner en route to a 9th place overall and scoring valuable points for the team. Full results from the Great Hawk Chase.

Next up will be the Border Battle in River Falls where Minnesota and Wisconsin riders will tow the line against each other for some great racing not before racing in North Dakota at the Gear Grinder where a few team members slated to make presence.

Posted by Jay Richards at 7:47 PM No comments:

A great weekend of racing for the team, waving the flag nicely, once again in three states. This time it was Montana where Matt Engen and Steve and Matt Wenzel competed in the Butte 50, Casey Hildenbrandt racing at the Wausau 24 and a good portion of riders competing at the popular Singletrack Attack at Hillside Park in Elk River. 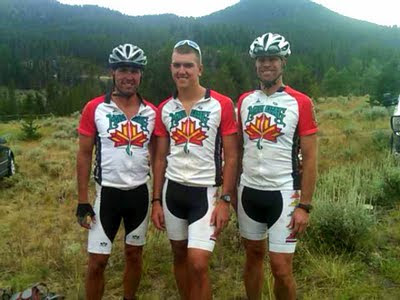 Steve, Matt and Matt post race at the Butte 50. The guys reported a fun, epic course and tough riding but a great time. Enjoying some riding this week in the Bozeman area. 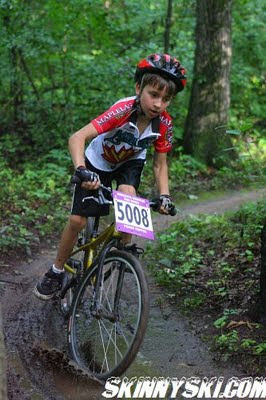 Wyatt Horner racing in the Singletrack attack, riding through the puddle proper. 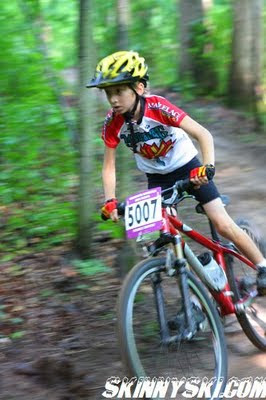 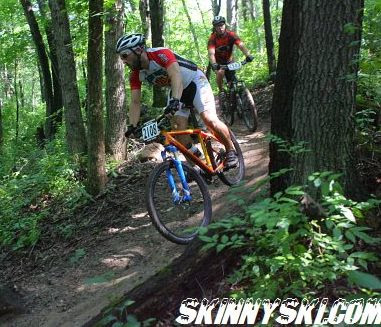 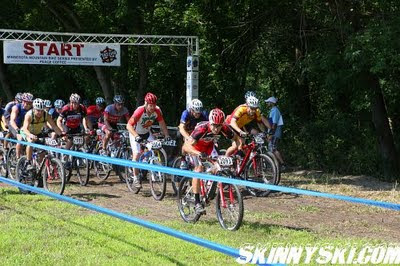 Denny Barry off the start in the Sport race. 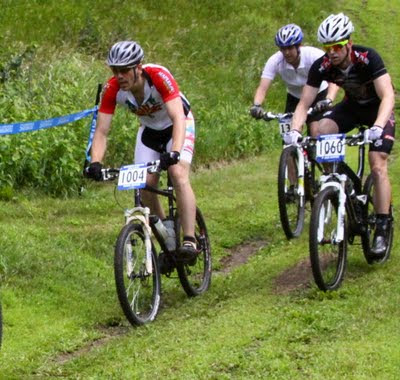 Brandon Charboneau heading out in the Comp race. 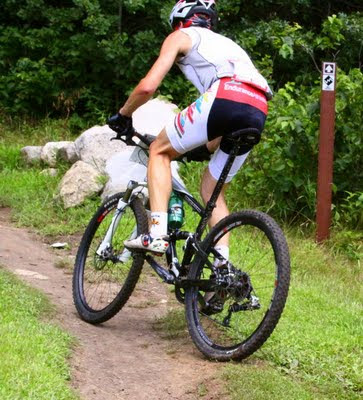 I woke up for this race & knew another hot race was on order for today.Thankfully Hillside is shaded from the sun,but that's not going to give much reprieve from the thick sticky air.
When I arrived I went about the usual routine of signing up & getting ready.
Warming up(although this was unecessary given the heat,it was trying to stay cool)The body felt ok,but it's hard to make any predictions.The "warm up" consisted of spinning easy a couple times down the road & staying in the shade.
It was time to line up so I settled in 2nd row.The countdown came & we were off.The start went off & was tucked in 5th or so behind my bro.Up the "big hill" he let me by.As we came to the top turn around I witnessed Scotty go OTB as he tried to go around Devin on the inside.I spoke to him later & he said "there was nothing he could do when he saw those rocks".At the bottom of the hill & back on the road it was Brendan off the front with a gap & Berry,Heath,& me chasing.Somehow I managed to bridge up to Brendan before the singletrack so I was going to try to hold his wheel as long as I could.I knew he was recovering from the start but I was stuggling to stay with him.He eventually found a groove & slowly walked away until he was eventually out of sight.
Shortly after I saw Jack coming up on me so I slowed to let him by.As he passed he said"I was riding the singletrack better than he was".I had to laugh because it was him who was passing me.I gave him the "atta boy!" & sent him on his way to chase Brendan down.
From that point on I was in no mans land so I put it in cruise control trying to drink as much as I could wherever I could.In the end I came in 3rd overall.Big thanks to Jonell for handups.I couldn't have survived without those bottles. 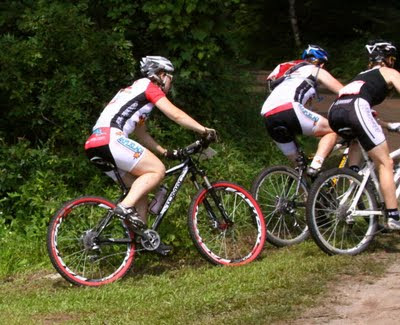 Coorey Coogan-Cisek and Alye DeRoma at the start in Women expert en route to a 3rd and 4th place finish, respectively.

Other Singletrack Attack riders competing include Matt Horner and Dan DeRoma in Comp, Andrea and Jordan Horner in Sport.

Click here for full results from the Singletrack Attack race.

As mentioned above, Casey Hildenbrandt was racing in the 24 hour event, Wausau 24 and recorded the 4th fastest time on lap 1, top Jr and reports "on one of the climbs I dropped Adam Swank and Chris Peariso...I was so stoked" Casey's form coming around as he gears up for the races later in the season including the Chequemegon Short and Fat.

Nice job riding by everyone. Thanks for representing so well!

Posted by Jay Richards at 7:33 PM No comments: