Back to Back series racing in Minnesota as July gets checked off and we move on to August.
Couple of team related events to note in August: The Flugly on August 25th and the Blacks River Crossing on the 26th  Thanks to everyone who has been toeing the line at the events, not only in Minnesota but across the country as well. 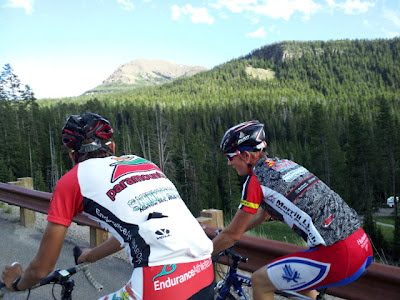 Jake and Jon Richards on a training ride near Cooke City, MT. 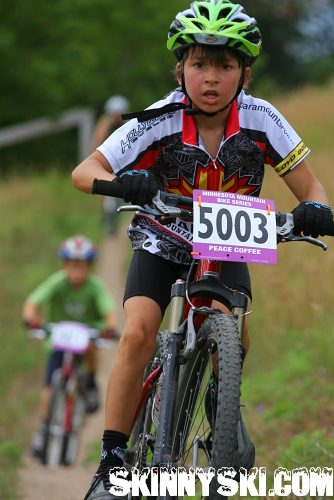 Wyatt Horner near the front in Kids Comp. 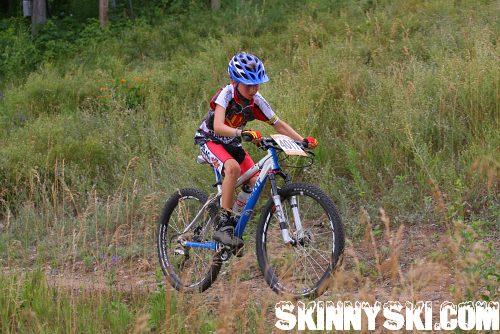 Devon Horner tearing it up in the Citizen class. 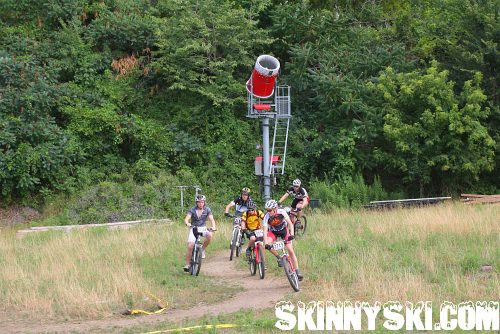 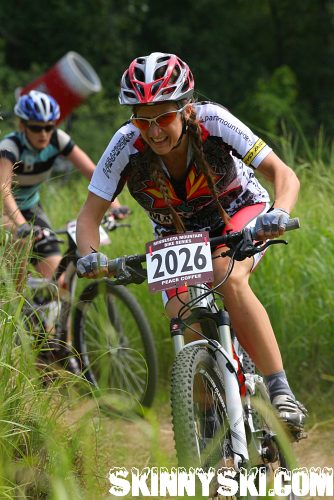 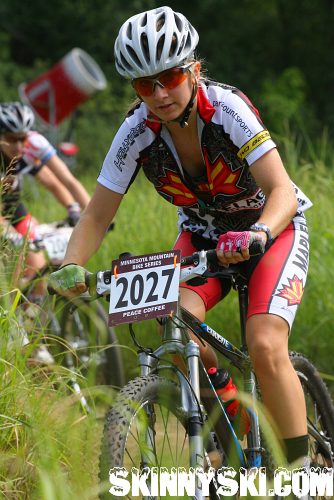 Jordan Horner mixing it up with the guys in the Sport race. Nice job on the win at Elk River! 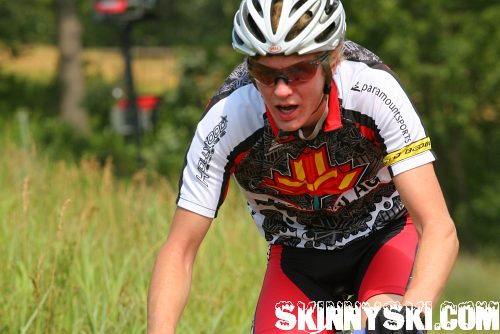 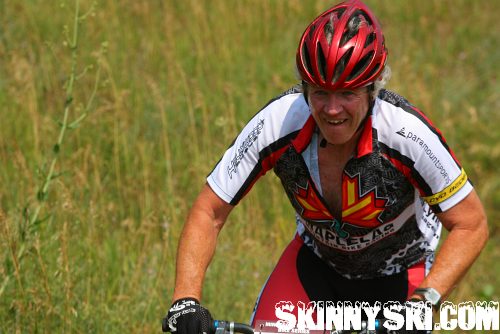 Denny Barry back from Ireland showing the youngans how it is done.

Sam Oftedahl 15th at Buck and leading at one point at Elk but flatting out. Eric Oftedahl 16th at Buck and at 20th at Elk and Mason Bacso 29th at Elk River. In Female Elite, Corey Coogan Cisek was 4th overall and sent in a report below:

I try to make sure never to miss the Single Track Attack.  The course is a blast, though passing (or in my case, being passed by the comp men!) is tough.  The organization is excellent, while the atmosphere is still low-key and totally fun. And, they pay-out 15-deep in the expert/pro races.  For those who don't know, the Minnesota Mountain Bike pay-out depth is based on the number of entrants.  With the women's field being so small this year, we struggle to get the 6 racers necessary to pay-out to more than just the race winner...and let's just say that with racers like Sara Kylander-Johnson and Jenna Rinehart racing in Minnesota, for most of us, the odds of winning aren't that great!

With the afternoon start time for the experts, I was able to stay at home watching the Olympic Road Race while it poured, and then arrive in Elk River to shining sun and a drying course. Having pre-rode the course the previous week, I felt that Elk River gets a little harder year by year.  This spring's rain created some impressive erosion and unearthed some roots.  With that in mind, plus the wet conditions, I tried to keep myself under control effort-wise so as to avoid making mistakes out of fatigue.  I think, however, that I speak for most when I say the race was about minimizing errors.  Between the wet roots, erosion, and some slippery corners, it was challenging riding. I have done a lot of road racing this year, and little MTB, so my skills aren't where they should be.  Still, it was nice to get back into the swing of things.  I'll be racing mtb exclusively from here until the start of cyclocross.

p.s. if I missed anyone, please let me know so I can give proper credit!
Posted by Jay Richards at 4:19 PM No comments:

After a break for the Fourth of July, team riders were back in action with Eric Oftedahl racing at Nationals and a handful of riders hitting up Lester Park in Duluth.

Eric sent in a report from Nationals:


"This was my first trip out to Sun Valley let alone Idaho. Sun Valley is the Hollywood of ski resorts. Fancy cars and houses are abundant in the area. After my pre-ride on friday I took the gondola and chairlift to the top of  Bald Mountain for lunch at the "Roundhouse Restaurant". While waiting for my food, I wandered about looking at the old pictures of Sun Valley and the restaurant from the early 40's when it first was built. Lucy even made a film featuring Sun Valley. It was a great place to relax and take in the scenery while enjoying some good food.
As stated before I did a nice pre-ride on friday. The course profile looked like a mountain itself; climb for half the race then descend for the second half. The second half also had a couple short climbs but they weren't too bad. The "ameture course" was 1, 18 mile lap around the mountain.  I really wanted to check the downhill part so I took the gondola to the top of the mountain and rode a connector trail to the top of the race climb on the back side of the mountain. Where the trails met was also the first feed zone. I laughed when I heard we had to fill our own water bottles from the gatorade jugs provided. It was so remote all they could do is get 3 jugs back to a picnic table. How they did it I don't know, because there was no motorized vehicle access back there. Anyway, I was feeling fine and the downhill was quite hazardous so it was a good decision to do the downhill and get a feel for it. What I found interesting about this race was 100% of the singletrack is mountain traverse, much like the last section of single track at Red Wing. However, this terrain was much rockier and sandier. One slip of the tire or wrong move could send you off the side of the mountain and it was always a long and steep way down. It was still a blast and I had a smile on my face all the way down.

My race started at 8am so it was nice to start in the cool mountain air which was key to not getting dehydrated with only 1 water bottle. On the start line I was 2nd or 3rd row which was fine with me. I haven't been as fast as previous years and I knew it was going to be a very long climb so I had plenty of time to move up. When the gun went off  I had one of my worst starts in modern history. I couldn't find my cleat for the life of me and missed like 3 or 4 times which put me in the back. We did a short prologue loop around the chalet area and then were sent down a flat paved bike path for 2 miles. I had to burn a few matches and put it in TT mode to catch the lead group right before the climb. Oh, did the climb hurt too. I found myself near the back trying to get into a good rhythm and run my own race. It took me a full hr of non stop climbing to reach the top, going from around 6,000ft to 8,000ft. The gravel road and doubletrack were brutal. There were a couple kickers in the beginning to sap the legs before the looooong gradual singletrack traverse to the top. The downhill was fun and I rode within my limits to stay safe. I passed a few guys with broken chains and flats, feeling fortunate not to be one of them. It would be a long hike a bike back if I was. The bottom section of singletrack that the pro course was on an even steeper hillside with lots of rocky, rutted, and loose switchbacks. I arrived at the finish with no one around me finishing in a time of 1:48 and in 21st place. The results didn't matter for me, only to have fun and stay safe which I did. It is a good experience to go some place and ride trails that are so foreign to us Midwestern folk and meet new people. I love riding out west and hope to make it to another Nationals someday.:"

Racing at Duluth and posting results were: 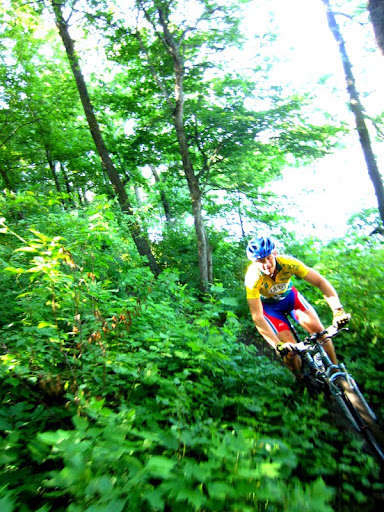 Earlier this week I hooked up with Chris "Zigs" Ziegler, one of the early riders of the Maplelag team. We rode a lap and half of the course, getting out early while temps still cool and no bugs. Good to hook up with Chris who was home from a few days from graduate studies (microbiology) at University of Vermont.

Keep the wheels moving!!
Posted by Jay Richards at 5:29 PM No comments: