A late season heat wave is ending out the summer as team riders have been racing across the Midwest in series races, grass roots type events and epic endurance races. In the Minnesota Mountain Bike Series team standings, the team has moved up to third! Nicely done. 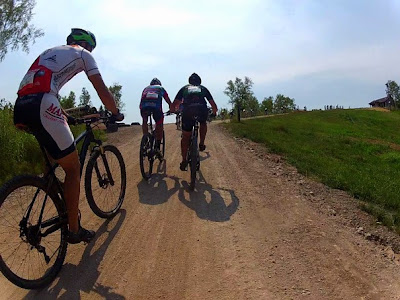 Jeremy Hecker on the big climb at Mon Du Lac.

After the  unique hill start , got to use the every hill you can find around that area , the next section was wind in your face for a few hundred yards and then into the single track . I was hanging close enough to Todd Hale's tail to feel if he ever took a quick nap or stopped for a sandwich I may have a chance to catch him , until the 3rd lap. On the weaving up and down the bank section,  some dude in a green shirt with a polo pony on it was walking his dog . Funny what one notices when trying to avoid things . I came around a corner , seeing this dude almost standing on the trail at the top of the steep little down , as I rounded the turn I needed to adjust my line to not elbow him , and then saw the dog in the middle about half way down , missed the dog , but not the tree waiting to attack .. Arm smacks an old limb stub sticking out ( which I didn't see ). Good thing I'm right handed because my oatmeal would  be cold by the time I would finish using my left arm , the  arm one with the big hicky this morning .
. I yelled some Irish not sweet tunes at the guy to get his dog on a leash and off the trails . After that it took awhile to get back to feeling in tune .One person passed my while I was getting my bike out of the brush . After hitting left arm on tree , the left turn at the bottom just came way too fast . I was prepped for hitting dog -with enough speed to hit it and ramp over .
long story longer - I attempted to catch back up to Todd , and had the second and last bobble of race occur - cooked a turn , did the third best save of a life time of saves - I did nothing  but shut my eyes  trying to   think quickly  about a what to do. My  bike did it all   for me as it seemed to sense it was leaned way too far on the dry marbles . It didn't brake nor did it put any pressure on the bars . I love my Giant , it has done things like this many times .
all good races need good stories , not all need me being the stunt man. Fun race
but no watermelon afterwards at 120  degrees with 106% humidity 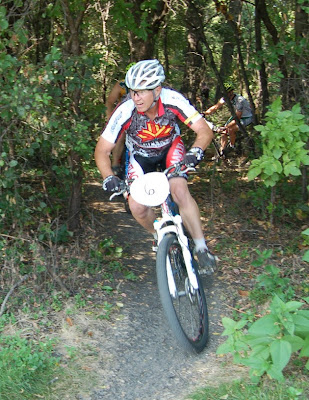 Denny Barry racing at the Flugly. 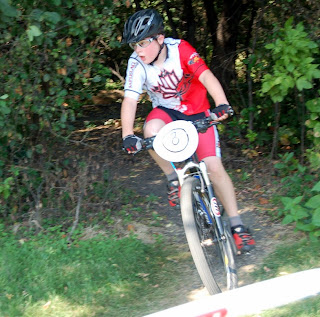 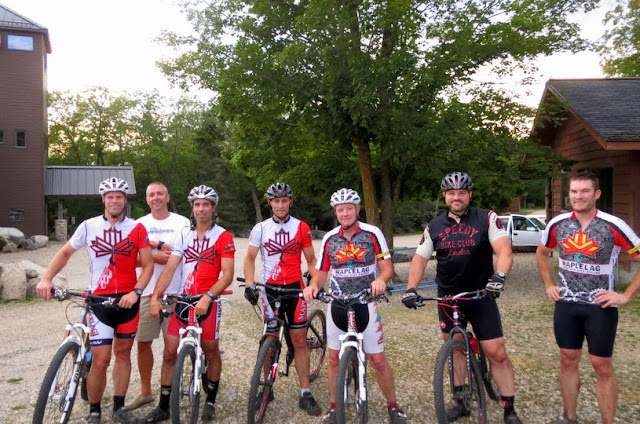 
Looking forward to having most of the team this weekend for the Laddies Loppet stage race weekend!